When I decided to resurrect my personal blog a couple of months back I was pretty sure that I want something fast and small that won’t require time to maintain. This narrowed down my choices to the static site frameworks like Hugo and Jekyll. As the latter is built on Ruby, which I’m not a big fan of, Hugo took the crown.

With that sorted out, I had another decision to make. What I should use to host it?

Once you pick up Hugo, you have a lot of options - Netlify, Github Pages, Gitlab, AWS Amplify, S3, you can even host it on an VPS instance LightSail.

As already mentioned I was looking for low maintenance effort and if possible cost effective solution too. As my repositories were going to be in Github, my shortlist was:

As I’m using AWS for living in the last couple of years, I scratched the Github idea and did a quick Amplify test. Hugo docs on deploying to Amplify are a good start if you ar leaning down that path. There’s also a nice AWS blog post combining Hugo with Cloud9 and Amplify.

I played around with it, and it looks like a really nice service to build different websites or applications with support for a lot of frameworks, but as actually pointed out in Amplify documentation itself it’s aiming to help frontend developers. And as I’m an infra guy, it was a bit more developer-centric for my taste.

With that settled, my solution started to take more shape and in the end this is how it looks like: 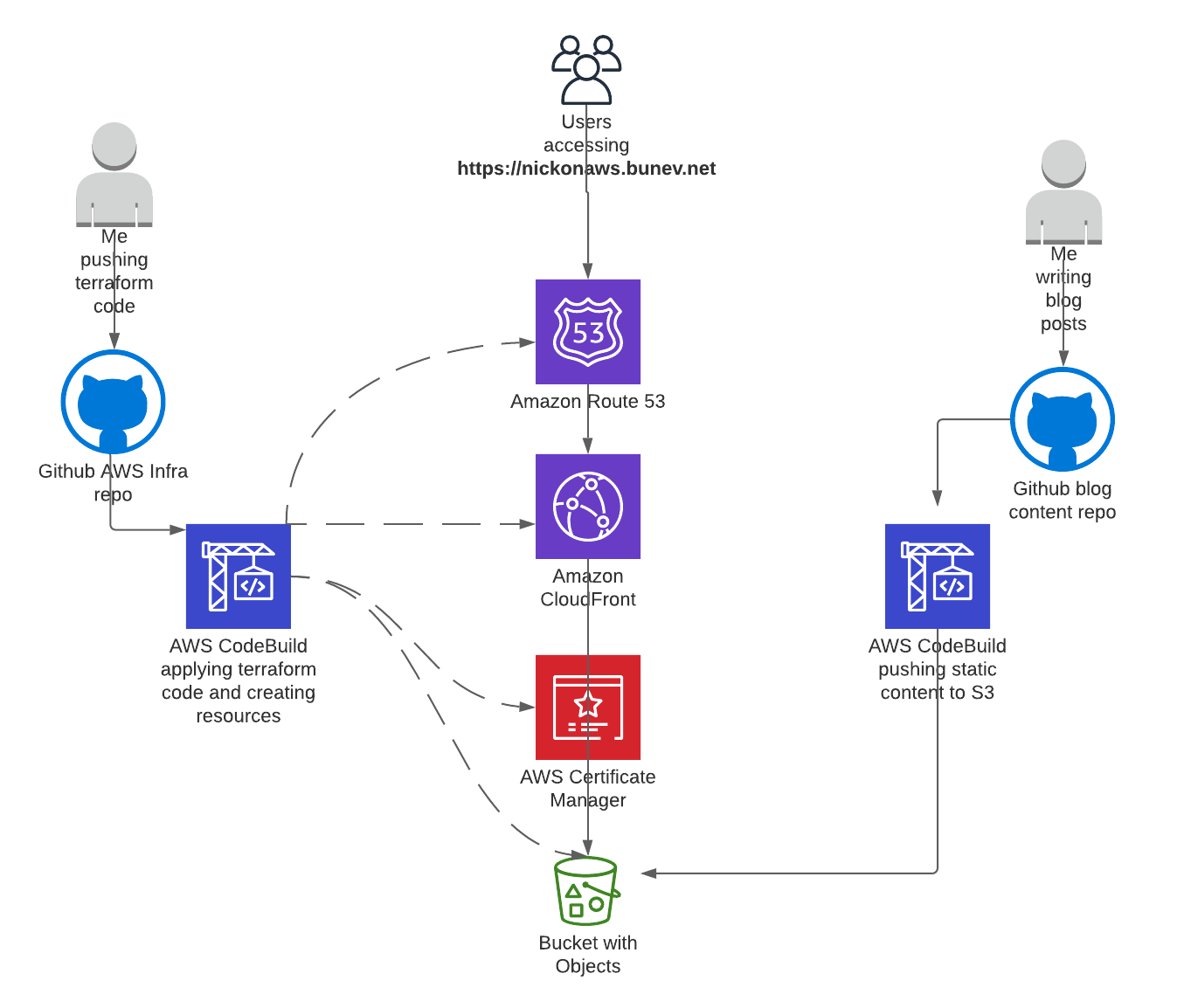 As already pointed out all this is created as Infrastructure as Code (IaC) with terraform. I should mention that I took a shortcut here and instead of writing my own code to do the task I went up using Nickolas Armstrong’s code, with a few changes some additions from me. If you are starting from scratch his repo is quite useful and could be used as is. However, I already had a state bucket with encryption and logging enabled, so I haven’t used that part of the code.

In addition, in his blog post he is doing the certificate validation and the Route53 record manually, so I wrote that piece on my own. My acm.tf looks like this:

I have also added this snippet to the cloudfront.tf file in order to create the Route53 record for the CloudFront distribution with terraform too:

So far so good. If you have combined my blog post with the one from Nicholas you should have a running Hugo site by now.

However, as visible in my solution diagram I wanted to have automatic blog posts creation once I push to my blog content repository.

In order to do so, we mainly need three things:

It should be noted that as pointed out in the codebuild_webhook terraform resource documentation the webhook requires OAuth authorization from CodeBuild to Github, which could be done manually in the Console prior to the terraform deployment of the resource.

The terraform code snippet for the webhook looks like this:

My buildspec.yml file has the following;

And voilla, the only thing that you need to do afterwards is to git add, git commit and git push - this is how this particular blog post ended up on the Internet.

If you want to take a different approach, I would recommend the following blog posts: